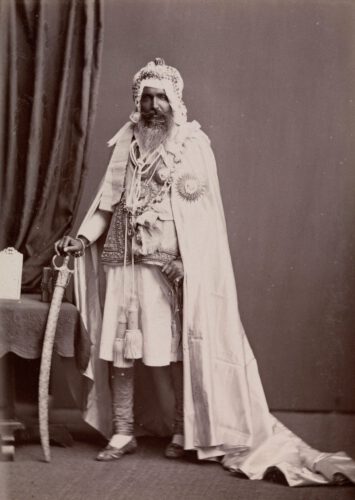 Maharaja Ripurdaman Singh, later known as  Sardar Gurcharan Singh  was the Maharaja of Nabha , before he was deposed by the Britishers .He was the  ruler of the princely state of Nabha for 12 years from 1912 to 1923. Born at Nabha on 4 March 1883, the only son of Maharaja Hira Singh and Maharani Jasmer Kaur. Ripudaman Singh was educated by private tutors including Lala Bishan Das and Sardar (Bhai) Kahn Singh Nabha celebrated Sikh scholar and lexicographer inspite of the resistance from  British advise to send to one of the newly established College modelled on English Public School. Upon his father’s death in 1911, When  Ripudaman Singh ascended the throne as Maharaja   of Nabha, he refused to be crowned by the Viceroy of India as was then the norm for a senior ruling prince in India.

Ripudaman Singh married three times, twice to ladies of royal blood and once morganatic ally and had 7 sons 5 daughters from them. In 1901, he was married  to Jagdish Kaur (1884-1927), daughter of Sardar Gurdial Singh Mann, a Punjabi judicial officer and owner of tea gardens near Dharamshala (now in Himachal Pradesh). A daughter, Amrit Kaur, born to them on 8 October 1907, was later married to Raja Ravi Sher Singh of Kalsia state.

Ripudaman Singh was appointed as additional member to the Imperial Legislative Council in Calcutta for a two year term. He was a staunch Indian nationalist. During this period he joined hands with nationalist leaders such as Gopal Krishna Gokhale, Madan Mohan Malaviya in their opposition to restrictive legislation such as the Press Act of the Government of India.   He was   befriended with Lala Lajpat Roy and other prominent leaders of the swaraj movement. During the First World War, he refused to contribute Nabha state force contingents for the British Indian Army. As a result, he was arguably the only Indian ruler who did not receive any British war service-related honours. Shocked by the events of the Amritsar Massacre of Jalianwala Bagh in 1919, he publicly opposed the British, clashing with his distant cousin Bhupinder Singh of Patiala , who was a strong supporter of British rule in India.

From 1906 to 1908, he was a member of the Imperial Legislative Council of India , where he spoke on behalf of the Sikh interest and pioneered reformist legislation. He represented Nabha in 1911 at the coronation of King George V. Continuing his interest in legal affairs, he reformed the state judiciary and enacted numerous pieces of progressive legislation, including laws providing for female education and a progressive marriage act. He also established a legislature and an executive council to govern Nabha.

He also introduced the Anand Marriage Bill sought to legitimize Sikh marriages conducted according to their simple religious rites known as Anand Karaj. His interest in social reform was further evidenced when he presided over the Indian National Social Conference held at Lahore in 1909. In 1910. He went abroad for medical treatment. He attended the coronation of King George V at Westminster on 22 June 1911. He was in France when the news reached him of his father`s death on 25 December 1911. He came back to India, and ascended the throne of Nabha on 24 January 1912.

His overt support to the Gurdwara Reform movement in the Punjab led to further alienation in eyes of Britishers. To relinquish control of Nabha to a British administrator, They have charged him even for  kidnapping and attempted murder through poisoning. Even some of Maharaja Ripudaman Singh`s own former confidants had deposed against him. Partly under British pressure and partly persuaded by one of his former officers, Captain O`Grady, he signed a letter of voluntary abdication on 7 July 1923, and the British government formally deposed him on 9 July 1923. He was sent to Dehra Dun on an annual pension of Rs 300,000 with many other concessions were withdrawn.

In 1923, Ripudaman Singh agreed to leave Nabha and to settle at Dehra Dun. For this he was granted a large allowance. However, he continued to intrigue and attempt to regain control of Nabha to some degree. In 1927, he went on pilgrimage to Sri Abichal Nagar Hazur Sahib and retook the Khalsa initiation rites, taking the name of Gurcharan Singh. The next year, he was formally deposed by the British for sedition and succeeded by his eldest son, Pratap Singh Nabha.

His efforts to regain his gaddi through lobbying with some prominent nationalist leaders, lawyers and journalists proved abortive. But he remained unbent and unrepentant. In a series of demonstrations and meetings people demanded the restoration of the Maharaja. The protest soon took the form of a religious movement which came to be known as Jaito morcha. The morcha or agitation was led by the Shiromani Gurdwara Parbandhak Committee. It became intensified after the state authorities had interrupted an Akhandpath, continued reading of Guru Granth Sahib, the Sikh Scripture, at Gurdwara Gang Sar at Jaito, a small market town. The agitation, while successful in winning freedom of worship in gurudwaras, failed in its political aim, i.e. the restoration of the Maharaja to his throne.

He was instead removed in 1926 from Dehra Dun to Kodaikanal, in the far South.He was stripped of his rank and titles and exiled to Kodaikonal  in the Madras Presidency . Thereafter, he was known officially as Gurcharan Singh. Two years later his pension was reduced to Rs 1,20,000, per annum, , He died at Kodaikanal on 13 December 1942 at the age of 59. He had been succeeded in 1928 by his eldest son, Pratap Singh Nabha.

Maharaja Ala Singh Maharaja Ala Singh was the first ruler of the princely state of Patiala, in British India, who ruled from (1709–1765). He was born in 1691 at Phul, in present-day Bathinda district of the Punjab, in...