Bhai Lehna grew very religious under the influence of his mother, Daya Kaur, and became a devotee of Durga, the goddess of Shakti. He used to organize yearly pilgrimage of devotees  Hindus to Jawalamukhi, a place of Durga temple in the lower Himalayas where fire comes from the mountains. He used to lead Durga dance around the fire in a harness of jingling bells.

Bhai Jodha, a Guru’s Sikh, lived in Khadur Sahib and it was his daily routine to rise early very morning and recite Japji and Asa di Var. One day as Bhai Lehna attentively listened the Divine Shabad recited by Bhai Jodha. He was highly touched by the words and the devotion with which he was singing.

His mind obtained so much peace that after the day break, he asked Bhai Jodha who had composed that stimulating hymn. Bhai Jodha then told him all about Guru Nanak, who was living at Kartarpur at that time. The touch of divine Shabad made such an impact on Bhai Lehna’s mind that he got impatient to meet the Guru. When he was on his annual pilgrimage to Jawalamukhi, he broke his journey in the way  at Kartarpur to offer his obeisance to the Guru and never returned back.

While going to see Guru Nakak Sahib, in the way he met a man and asked him, that I want to see Guru Nanak, from where to reach his  residence. He requested him to guide the way leads to Guru Nanak residence. The traveler took the the saddle strings of his horse and told him to  follow him since  he is also going there. When they reached the destination, he told him to tie his horse in an open space and directed him to a door, where Guru Nanak Dev Ji used to sit. When Lehna went inside and bowed before Guru, he became surprised to see that, the person who took him to this place was Nanak himself. Tears came from his eyes thinking that all the way he was on the horse comfortably and Guru was walking on the foot. Guru Nanak asked his name and said,” why  are you crying, when Lehna gave the reason  Guru Nanak said,” your name is Lehina, you are taker and I have to give. Lehnadar are always  on the horses and dendar are on foot. His first meeting with Guru Nanak Sahib brought a revolution in his life to see his spiritual look and his humbleness to this extreme. He forgot Devi darshan and sent a message that “do not wait for me as I am not joining the trip”.

He spent almost seven years in Kartarpur (1532-1539) in the service of Guru Sahib and passed in every test Guru Nanak Sahib has given him to know, if he is fit to be a Guru, leaving his own sons who were not. From morning to evening, he used to serve Sangat with utmost love and devotion, help in the langar, in farming, and always ever ready to obey his next order without but and why. He has overpowered his five sins ( kam,krodh lobh, moh, hankar) and prooved a sincere devotee towards Guru Sahib. Having subjected Lehna’s discipleship to various tests over the years and ultimately  Guru Nanak touched Bhai Lehna and given him the name Angad (“My own ang”), and designated him as Guru Angad on 13 June 1539, the second guru of the Sikhs, instead of choosing one of his own sons. All the Sangat bowed before Bhai Lehna  and accepted him as a Guru but Sri Chand and Prithi Chand, sons of Guru Nanak had shown him their back. Baba Budha had performed the ceremony.

After Gurgadi, Guru Nanak Sahib ordered him to go to Khdoor Sahib near Goindwal Sahib for Parchar and Parsar as he knew that in Kartarpur, his sons would treat him badly. After some time Guru Nanak Sahib came to meet Guru Angad Dev in Khdoor Sahib and took him back to Kartarpur Sahib knowing his end to be near which happened on October 1539.

Guru Angad ji became so much lost and unable to bear the separation from Guru Nanak Sahib that without tellling anybody, retired into a room in a disciple’s house in a state of Vairagya in Khdoor Sahib. Baba Buddha later discovered him after a long search and requested him to return for Guruship. The Gurbani says the words what Guru Angad Dev ji felt and uttered that time “Die before the one whom you love, to live after he dies is to live a worthless life in this world”. was the first hymn in Guru Granth Sahib by Guru Angad Dev Ji and signifies the pain he felt at the separation from Guru Nanak.

Ultimately He controlled his emotions and realized his duties towards Sikh Sangat and started working on the mission of Guru Nanak. He started sikhi parchar and persaar, drafted programmes to strengthen Sangat, and taken care of newborn Sikhi of Guru Nanak which has to be saved from Guru’s, sons, Sanyasis, Jogi Brahmans and Moughal Hkoomat. Guru Angad Dev Ji had a creative personality and was the lord of great and rich in divine qualities by which he first became a true Sikh and then a great Guru. He thought staying in Kartar Sahib may arise conflict with the sons of Guru Nanak and the people of other sects, who were jealous about newly developed Sikhi. On 2nd October Guru, Angad Dev Ji left Kartarpur after handing over all the wealth that belongs to Guru Nanak to Baba Sri Chand and came back  to the village of Khdoor Sahib.

His Guruship life starts in Khdoor Sahib. He used to get early morning, do Simran, hold darbar, after which he used to translate the Gurbani written by Guru Nanak Sahib, propagate his teachings, his mission, (Kirat Karna, vand chhakna, and Simran Karna) to attach more and more Sangat with Guru Nanak Sahib. He used to talk about the need and importance of having a Guru, the importance of sangat and pangat which were the basics on which the Sikhi is generated. He propagated the ideas of Guru Nanak Sahib in both forms, written and emotional. He spoke deeply and have open discussions about spiritualism with yogis, saints, soofis of various beliefs and sects.

In Khdoor   Guru Angad Dev ji continued the  Institution of Langar being  maintained and developed . The Guru’s wife Mata Khivi, personally used to supervise work in the kitchen and served food to community as well as give money to the poor and needy people which is mentioned in Guru Granth Sahib. The Guru earned his own living by twisting coarse grass into strings used for cots. All offering went to the common fund. It demonstrate that it is necessary and honourable to do even the meanest productive work. Parasitical living does no go along with mystic and moral path.  Mata Khivi -wife of Guru  Angad Dev ji became  incharge of Langar -who set  example of that woman which is no less than a man.

All the offerings used to go in the common fund. Guru Angad Dev Ji used to earn his own living by twisting coarse grass into strings which were used for cots. It demonstrated that it is necessary and honorable to do even the meanest productive work as parasitic living was not encouraged in Sikhi. and is not consance with mystic and moral path.

There Guru Angad popularized the present form of Gurmukhi Script which became the medium of writing the Punjabi language as well as the writing of hymns of Gurus. Earlier the Punjabi Language was written in the Landa or Mahajani Script which had no vowel. So there was a need to develop a script which could reproduce the hymns of Gurus with  true meaning and message.

He took great interest in the education of children by opening first formal school and multiplied Gurmukhi Kaidas for distribution to the children. For youth he started Mall Akhara where physical as well as spiritual exercises were held.  The combination of physical as well spiritual education for the youngster is one of the example set by Guru Angad Dev ji (World Record). At the time of Guru Har Gobind Sahib the army persons were taken from Mal Akhara.

Humayun when came to see Guru Sahib after his defeat, to have darshan. There he  expected special treatment being a Emperor but when he was not  given that attention being Guru busy with his children, he took out his sword to kill him. When Guru Sahib saw him He said,’  ਇਹ ਤਲਵਾਰ ਹੁਣ ਫਕੀਰ ਵਾਸਤੇ ਉਠਣੀ ਹੈ ਜਿਥੈ ਇਸਦੀ ਲੋੜ ਸੀ ਉਥੇ ਤਾਂ ਉਠੀ  ਨਹੀਂ” The Hamayun became ashamed of his attitude and asked for forgiveness” Then Hamayun told Guru Sahib the reason he came. Guru Sahib told him this is not the time but time will come when you get back your Badshahi . So with the blessings of the Guru  Hamayun returned to his country Afghanistan. and having obtained a reinforcement of cavalry from the king of Persia,  returned back to India. After fighting a pitched battle he recovered his empire and captured Delhi.

He constructed a new town at Goindwal Sahib near Khdoor Sahib and a new center at the bank of Ravi-quite a long distance from the center of Baba Sri Chand, so the Sangat does not get confused, He left Kartarpur Sahib after giving every wealth belong to Guru Nanak to Baba Sri Chand and came to Khdoor Sahib just to not compete with Baba Sri Chand, which was  taken care by Guru Amardas also . He travelled far and wide and visited places , centers established by Guru Nanak to preach Sikhi and also established hundred of new centers to strengthen the infrastructure of Sikh Society

Before his death on 28 March 1652 (  some writes 16 April, 1652).Guru Angad, following the example set by Guru Nanak , nominated Guru Amardas, a highly devoted and  most deserving disciple  as his successor (The Third Nanak). leaving behind a rich legacy of devotion, dedication, disciplined and benevolent life.

Guru Sahib instead of writing his own Hymns concentrated on consolidating the Hymns of Guru Nanak Sahib He also supervised the writing down of Nanak’s hymns by Bhai Paidha Mokha in Punjabi and scrutinize the resulting compilation, preparing the way for a Sikh scripture. He learned about the details of facts of Guru Nanak Sahib’s life from Bhai Bala Ji and the disciples of Guru Nanak Sahib, who used to attend Guru Nanak Darbar, and were very much present and close with Baba Nanak. He wrote a biography of Guru Nanak Sahib which is the first biograpy in Sikh Itihas. 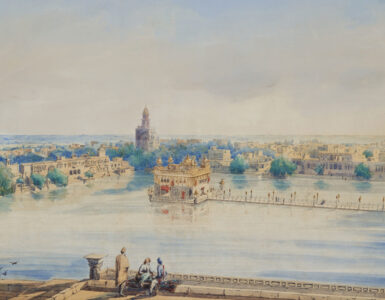